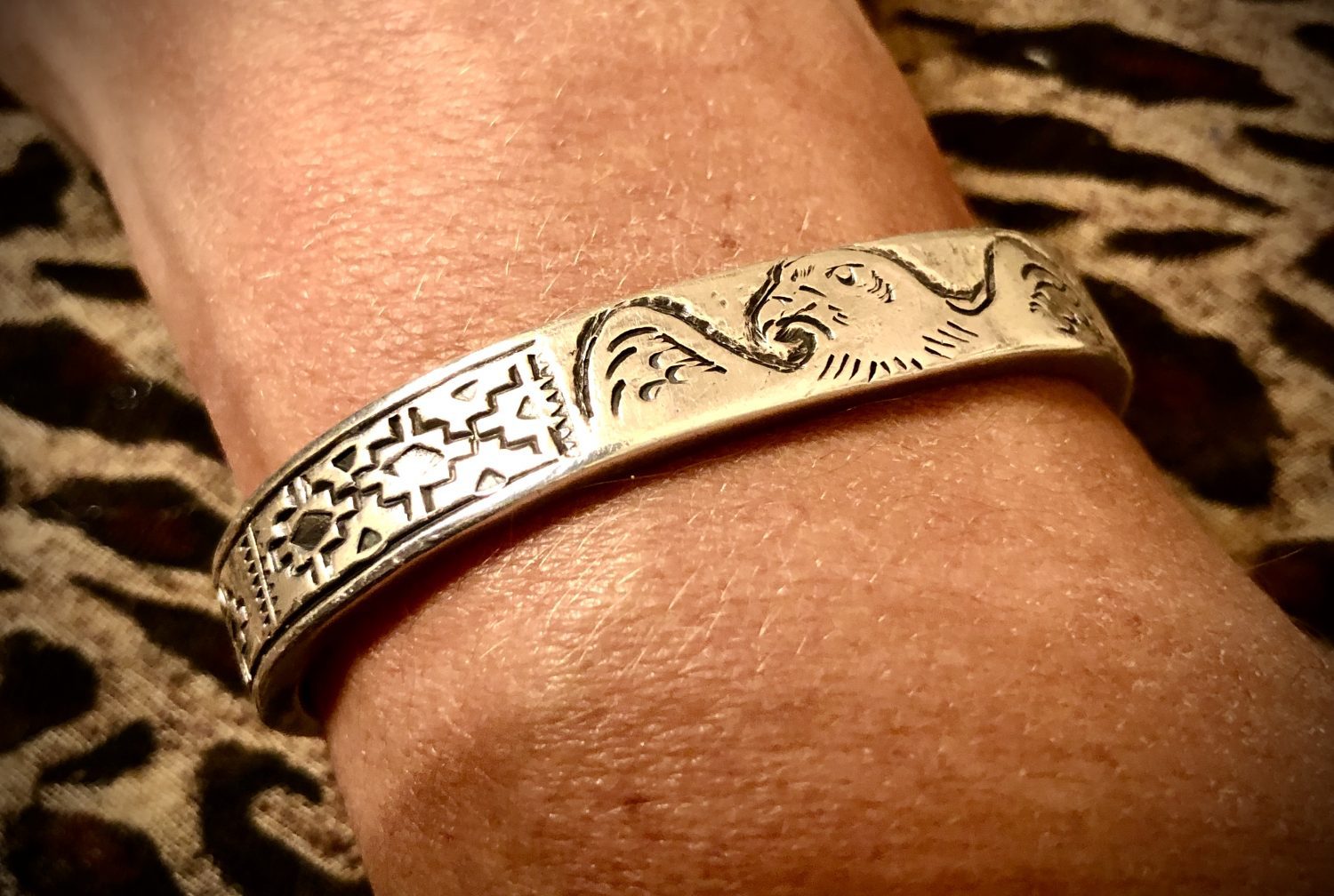 Today was a special day. The circle is now complete. But to understand why, I will first go back to the summer of 1998.

I was on a road trip in Arizona with a group of Dutch students. We had just visited Monument Valley and took a break at a public restroom in the middle of nowhere. Only desolated dessert ground and an occasional cactus.

I was waiting in line and in front of me stood an indigenous woman with long black hair, dressed in traditional clothing. Just before it was her turn, she promptly turned around and looked me deep into my eyes. I will never forget it. She said, "I have to give you something special." She took a silver bracelet from her wrist and said, “This is a bracelet from my family, the Navajo Indians. It carries the wisdom of our roots. Here, you see the eagle for protection and the symbols of Two Grey Hills. I see your bright light. Please, take this bracelet and spread your light into the world.”

I was perplexed. I stuttered “Thank you” and accepted the bracelet. It was her turn to go to the restroom. Immediately, the restroom next to hers became available. I ran to it, had the fastest pee ever, swung open my door again, ready to express my gratitude to this Indian woman. I looked all around. I even glanced under the door of her toilet. I searched every where in the wide area. She was gone. Gone…

"I see your bright light. Please, take this bracelet and spread your light into the world.”

And here I am 22 years later, again in Arizona. I’ve worn the silver bracelet every day for more then 11 years. I felt so connected to the Native American people. Sharing the story of this mysterious lady would already bring tears in my eyes. And was it because of the bracelet that I, for the last 10 years, processed so much collective trauma of the indigenous people? I would wake up in the middle of the night and write down story after story of the lives of indigenous people and their tribes.

So when I returned to Arizona five weeks ago, I knew that there was going to be a completion of some sort. But how and when? No idea. The signs would come when I was ready. And then a little while ago, on my way to the Grand Canyon, out of the blue a great storm of emotions and sensations bubbled to the surface. I knew it had to do with the Navajo’s. Only later did I realize that I was driving on their land and feeling all the associated energies!

A few days later I received a vision that I had to drive all the way around the Navajo land. I wasn’t supposed to connect with the people, just driving on the land was sufficient. Well, another few days later I discovered that due to Covid the whole Navajo Nation was shut down, except for the highways all around it… So perfect. My assignment was clear. Today was the day. I left ‘home’ at 6 in the morning and drove hundreds of miles. To be precise 1200 kilometers or 750 miles. All in one day. From the moment that I crossed the border of the Navajo land my hands started moving and shaking and a stream of light codes flooded out of my mouth, alternated by endless yawning. And that went on and on and on. At some point I realized it was mainly my right hand which carried the bracelet around the wrist. As an experiment I changed the bracelet to the left wrist and promptly my left had started moving. It was the bracelet that initiated the hand movements!

It suddenly dawned on me. I have been a Navajo Indian myself! The rock formations started talking to me. I knew them and they knew me. They where so alive! I don’t know anyone who can get so excited by looking at rocks as myself… I experience them as beings, galactic portals and ancestral representatives. Of course I recorded some transmissions for the upcoming ‘Red Rock Series’. Wow, what a trip. The message was one of completion: I can now integrate that part of my soul that was not fully aligned yet with the rest of me. Ancient wisdom can be revealed and old stories and sensations can finally be put to rest.