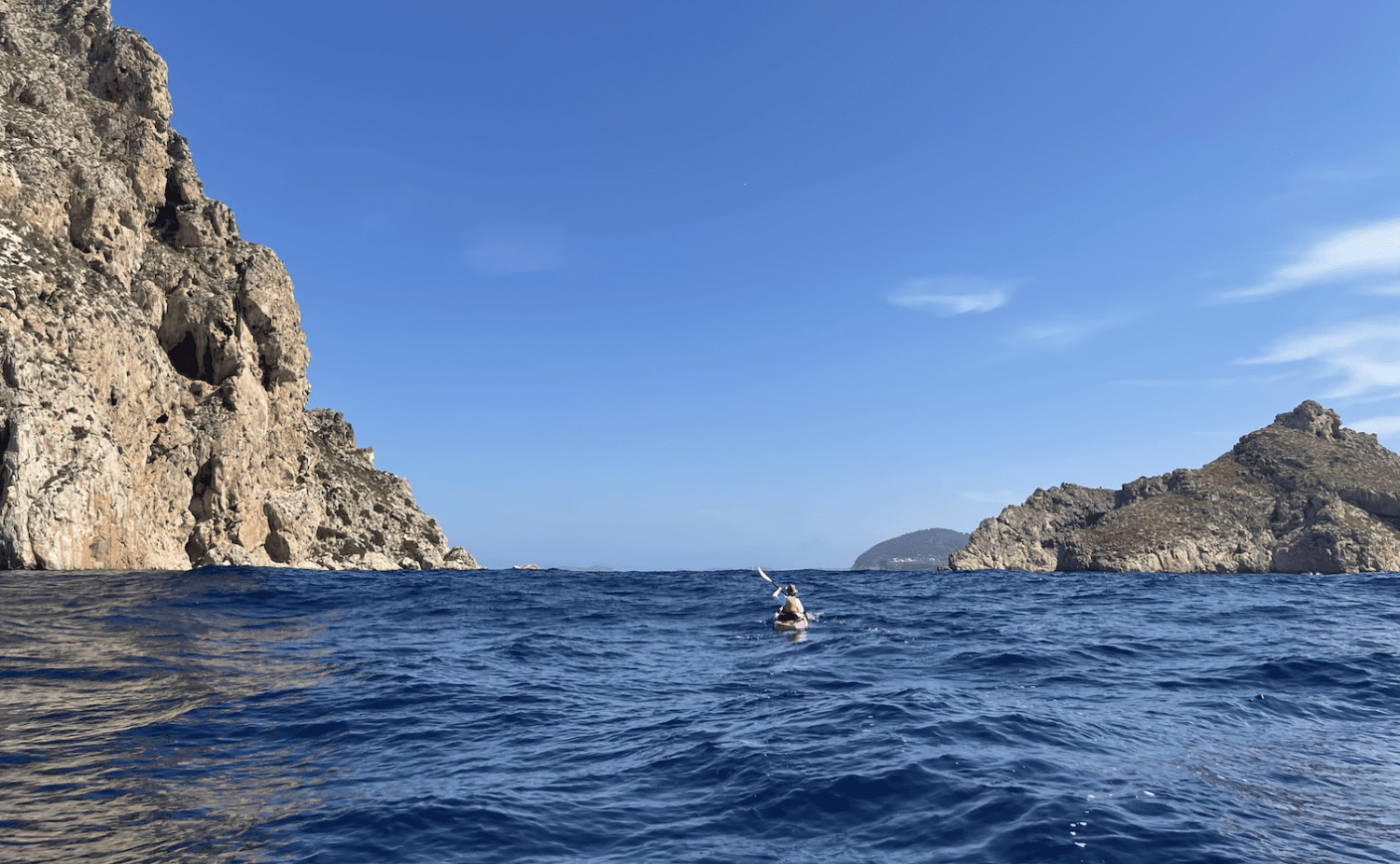 Es Vedrà and I have had a deep connection since May 2016. When I saw ‘him’ for the first time (knowing nothing about it) I burst out crying, saw orbs flying above in all colours of the rainbow and dolphins were swimming around it (still not sure if they were actually physically there though ;-)). In that moment I received visions of ancient times where everything was going down into the water. A total collapse. It was then that I discovered that Es Vedrà is an immense multidimensional portal connected to the old civilisation of Atlantis. And I knew I was involved in some way.

Then in May a year later I received the (inner) message that I was going to sell my house and move to Ibiza. And that’s how it went. Since I didn’t have a new house yet, I camped out as close to Es Vedrà as possible and visited my ‘master-in-stone’ every single morning for three weeks in a row. ‘He’ helped me release a lot and I felt our connection getting stronger every the day.

Then Sabriyé Ayana invited me as one of the healers during her Ibiza retreat in May 2020. I instantly got a vision of countless rainbow colors, so I knew that something very profound would happen during that time. It got postponed for two years and here we are. May (again) 2022…

Of course one of my first things to do was go visit my dear master-and-friend-in-stone. This time he asked me to be his mouthpiece / spokesperson, so that he could share his messages and healing energy with other people. I felt a big yes of course. I started recording Light Code transmissions of Es Vedrà and other powerful places on the island (soon to be published in an online series). I took the whole retreat group to Es Vedrà for a ceremony and celebration. That’s when I received my next mission… You go kayaking to the vortex itself. “Of course, I’m in”, I thought. Not really thinking about it, but knowing that this was part of my soul’s plan and the biggest reason why I was here. So there was not a single doubt about how to execute the mission.

Then two days before the kayak endeavour, I received more information. “You are going to close the portal of the downfall of Atlantis.” “Ok, I’ll do whatever is needed,” I thought. Slowly but surely I realised that I was not going to do this whole thing on my own. The retreat was over, but four of the participants were eager to join me. Bridget, Mirjam, Gabby and Jeff. All in some way related to Atlantis and its downfall.

Kayaking to the vortex

Alright, so there we were this morning (Monday May 30)… Ready for whatever was awaiting us. Dancing on the surf and balancing ourselves we steadily embarked on the journey. During about 3+ kilometers the sea was relatively calm. Wonderful. It’s going great! I could see Es Vedrà welcoming us with open arms. I was in bliss and so happy to be so close to my lovely friend. I could see the multidimensional crystal castle that he actually really is. So precious! The clouds, also involved in our co-creation, showed a white dragon and beautiful angel wings. I felt so comforted and carried on the waves and in the presence of high frequencies. Everything was still relatively quiet and peaceful… Then I saw in my mind an infinity symbol around Es Vedrà. Es Vedrà by the way consists of two rock formations, one called Es Vedrà and the other Es Vedranell. A 200 meter wide channel of water runs in between both rocks. The center of the infinity symbol was in that channel and the two sides of the symbol where going around the rocks. I knew I had to go to the center of the channel.

Then suddenly I felt the urge to take my phone out of my dry bag. I had attached the bag behind me… Not that easy. Oh well, I’ll manage… Wobbling around on the water, I took my bag in between my legs and got my phone. Putting the bag back again was not as easy anymore, so… I decided that it had to stay in between my legs. "Please, waves, be gentle, so that my bag can stay inside of the kayak". As soon as I had the phone in my hand to take photos I knew I was supposed to do a Facebook Live. I was laughing inside. Are you kidding me??

Slowly the waves had taken me towards the channel. They started growing bigger. "Now is the time for the Facebook Live", I felt. "OK, well, let’s go for it!" And that’s when everything went very quick. Instantly the cosmic sounds started to come through faster than I think I’ve every spoken them. The waves automatically took me to the center of the channel. And as soon as I arrived in the vortex a school of dolphins showed up underneath my kayak and started circling around me. You can’t make this up! I excitedly yelled at Jeff (as you can hear in the Facebook Live

) and as soon as he came closer the same happened to him! A school of dolphins was circling underneath his kayak. I was in awe. The energy got more and more intense and so did the waves. I allowed everything to happen. My kayak seemed to know how to effortlessly handle the waves which had grown 3 to 4 meters (9 to 12 feet) high. I quickly stopped the Facebook Live because I really had to now pay attention to the waves. I realised that I had drifted over to the other end of the channel which gave access to the ocean. Oops… Powerful currents here…“I now have two choices in how I’m going to handle these waves,” I thought. “I can experience them as aggressive and dangerous or I can embrace their massiveness and see this as a dance." I instantly felt total surrender to the flow of the waves. Taking me up and deep down, up and deep down again. Hardly any thoughts, just peddle and focus. Nothing more.

There seemed hardly any progress and for a long time I had the feeling that I stayed at the same spot while giving all my strength to the peddling. But very slowly but surely I came back to the center of the channel. The place of the vortex… The waves now literally looked pitch black. I could see all the low vibrations connected to the downfall of Atlantis disappearing into the vortex. The vortex was ‘eating’ all the blackness. And I was peddling on top of it! Observing all the darkness, but not identifying with it, because that would have been my downfall as well

. I knew that this was al about mastery. First of all mastering my physical energy while in very challenging waters, but as important was the mastery of my mental and spiritual energy while being in the middle of all those dark energies. It was a trip. It really was.

An old part of me was dying off and being syphoned away into the vortex. I felt peaceful. It’s done. The collective memories of the downfall of Atlantis have now disappeared into the vortex and the chapter is closed. Ready for a new chapter. How else can we create a peaceful and loving New Earth if we as a collective are still subconsciously holding onto the painful memories from the past? If we still believe we can fail, we will attract those realities. As soon as we have risen above the concept of failure and transmuted all related memories, we can fully allow that bright and shiny New Earth to arise.

Slowly but surely the waves got a little less imposing and I finally came out of the channel. Jeff however was still right in the middle of the vortex and it didn’t look like he was progressing at all. I started looking for a boot that could help him out, but then I felt a very calm sensation: “You have to trust him. You have to trust the masculine. If you don’t, you’ll disempower him with your energy. The masculine needs to feel that you trust him." That goes for the collective masculine as well, of course. And that’s when he finally came closer and closer, working his way through the channel. We made it! Later he told me he was taking photos and filming while jumping on the waves in the middle of the vortex

We ‘only’ had 3 kilometers to go! Even though the water was not as calm compared to our way there, we relaxed and made it back to the shore. High on our own supply. “Don’t loosen your focus yet, because the see is unpredictable,” I heard inside. Oh well, we were now only 100 meters away from the beach, so I laughed and waved at the other three that were awaiting us. And that’s when a huge wave hit me and I got plunged into the water, hit in the back of my head by Jeffs kayak. “You see, that’s what I meant with keeping your focus until the very end!” said the laughing voice inside of me. "Oh well, at least I’ve now had my cleansing shower after this profound transformational experience. I’ll buy a new hat and new sunglasses. I hope someone will be happy with them when he finds them on the beach.

Seen from the beach, the water around Es Vedrà looked calm and it felt as though this unforgettable experience had never really happened. It was surreal. One thing is for sure, I will cherish this day for the rest of my life and won’t try to grasp how it actually all went so smooth. Divine guidance is always there. We just need to allow ourselves to be taken by the hand and know that you are taken care of.

Read in next blog how the mission to close the portal got completed in the Tanit Cave (beautiful feminine energy): BLOG | Tanit Cave – The Closure.