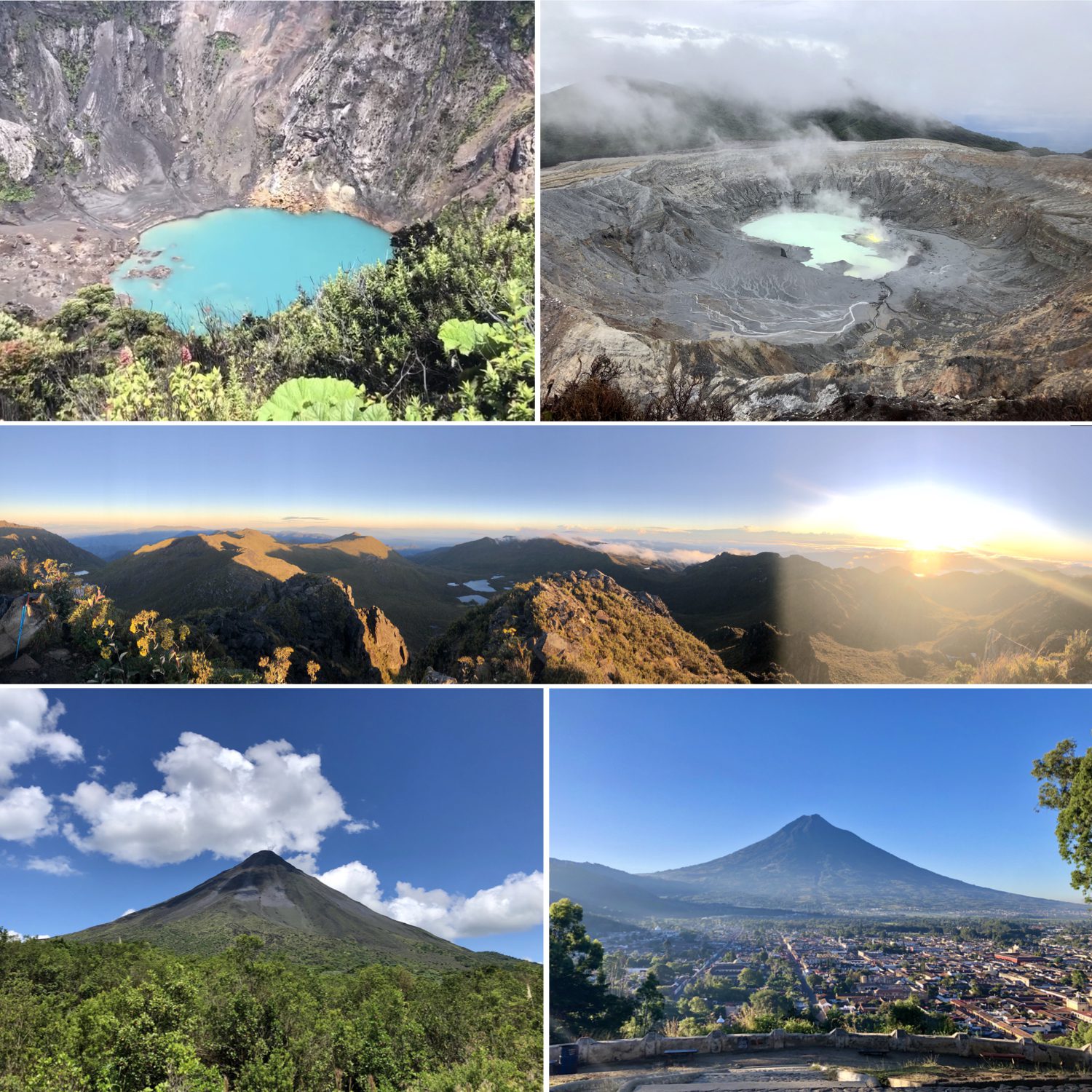 The sky is blue, the sun is warm, colorful flowers decorate the rooftop from which I have a perfect view of three volcanoes: Agua, Acatenango and Fuego. Every ten minutes Fuego shows its power by erupting and releasing plumes of smoke. At night you can see the fiery magma spouting into the air as if a bottle of champagne is opened to celebrate… LIFE. I’m in Antigua right now, the former capital of Guatemala. It all feels so familiar. I’ve been here before, but only not in this lifetime.

So here I am, seven weeks into my journey in Central America. After a month an a half in Costa Rica I suddenly felt Guatemala calling me, so a day later I was on my way. It’s the freedom of living and traveling without a plan that enables me to instantly follow my instincts and be constantly available for new experiences and ‘assignments’. The next chapter opens up when the previous one is fulfilled and completed.

“When it would be unclear what to do or where to go, I would find myself on my way to a volcano.”

We know each other
The fresh green jungle, the cleansing Pacific ocean and the empowering volcanoes of Costa Rica allowed me to ground myself bit by bit into the Central American vibes. As a preparation for what is to come. When it would be unclear what to do or where to go, I would find myself on my way to a volcano (there are so many here ;-)). It is so easy for me to feel at home there. The volcanoes and me, we ‘know’ each other. Yes, they are massive mirrors, so whatever is ready to be released will present itself while being in the presence of this living being.

Co-creation
One day I arrived at the crater of Irazú Volcano. It was completely clouded, you couldn’t see a thing. Many people were disappointed, but I knew, just give it some time… As within so without: I knew that whatever ‘cloud’ was going on inside of me, it was being reflected in the presence of these thick white clouds covering the top of this volcano. I sat down and spoke the cosmic sounds and light language for a while. That’s my way of meditating and tuning in. Suddenly a deep doubt bubbled up into my awareness. “I’m not able to co-create with the elements of Mother Earth,” was the voice inside of me. I felt a sad pain of feeling separated from Mother Earth. It came quite unexpected, but of course I was grateful that this inner voice expressed itself. I know that I’m being prepared for something and that this doubt would not at all fit in that ‘something’ that is about to unfold. As soon as I realized that this feeling was an outdated doubt that didn’t match my present experience of life, the clouds dissolved and the sun came through – instantly. Within just one minute the summit of this majestic volcano showed herself completely and revealed the blue crater lake. I rrrran to the crater, in total bliss, feeling SO connected to Mother Earth. People were astonished about that abrupt change in visibility. How could this happen so quickly?

Portals
A few weeks ago I suddenly felt Chirripó volcano approaching me. It’s the highest volcano of Costa Rica and climbing to the summit was said to be quite challenging. Since I didn’t do any multi-day hikes for some years, it was going to be an interesting experience for me. My connection with volcanoes started 20 years ago when I climbed Cotopaxi in Ecuador. Since then I’ve climbed 17 volcanoes to the summit without really being aware of my connection with these power spots. I just thought I liked the physical challenge. But now I’m starting to gain deeper insights. ‘I’ (as a vessel) have a task here. Volcanoes are portals and they want to be opened to our collective consciousness, assisting us in reconnecting with our life force, helping us to surrender to that massive inner power that resides inside of every one of us.

“I sat down, started recording the first transmission and instantly the clouds dissolved, the sun came through and a bright rainbow appeared in the valley.”

So I started the two day hike to the top of Chirripó. Slowly, step by step. By focussing on my life force deep in my belly and my profound connection with the volcano, I tapped into another power than only the physical power in my legs. Of course I still had to physically climb 2300 meter in altitude and cover 20 kilometers to the top, but it was now very doable. It had not been raining for 5 days (which is an exception during the rainy season), so the path was relatively dry. I just felt that everything was supporting the mission on the top: recording a transmission that would help to open up the portal. When I arrived at the base camp, 400 meter lower than the top, it was a bit cloudy again. I sat down, started recording the first transmission and instantly the clouds dissolved, the sun came through and a bright rainbow appeared in the valley. I felt so welcomed by the mountain and all cosmic forces. We are a great team, we co-create for the highest good of all. After spending at least an hour on the intense cold summit early morning the next day, not wanting to leave it, I started the descent, feeling a grateful sense of completion in my heart. The next day it started pouring with rain…

Fiery Fuego
And then Guatemala came into my awareness. With my inner eye I saw a very active volcano, erupting frequently, waving me over. My whole body felt ‘electrolyzed’ and activated for an entire night, I could hardly sleep. That’s what happens when I start a new chapter: I feel the transformative powers already in advance.

So tomorrow is the day… I’m ‘ready’ for my encounter with the fiery Fuego volcano and it’s twin as they call it: Acatenango volcano. I already feel the rumbling energy buzzing through my body. Let’s see what wants to happen… Ready for the next mission. And what a great preparation for the upcoming 12/12 transmission (December 12, 2019)!

PS II: in case you’re planning a trip to Costa Rica or Guatemala, here are four hostels that I loved staying: