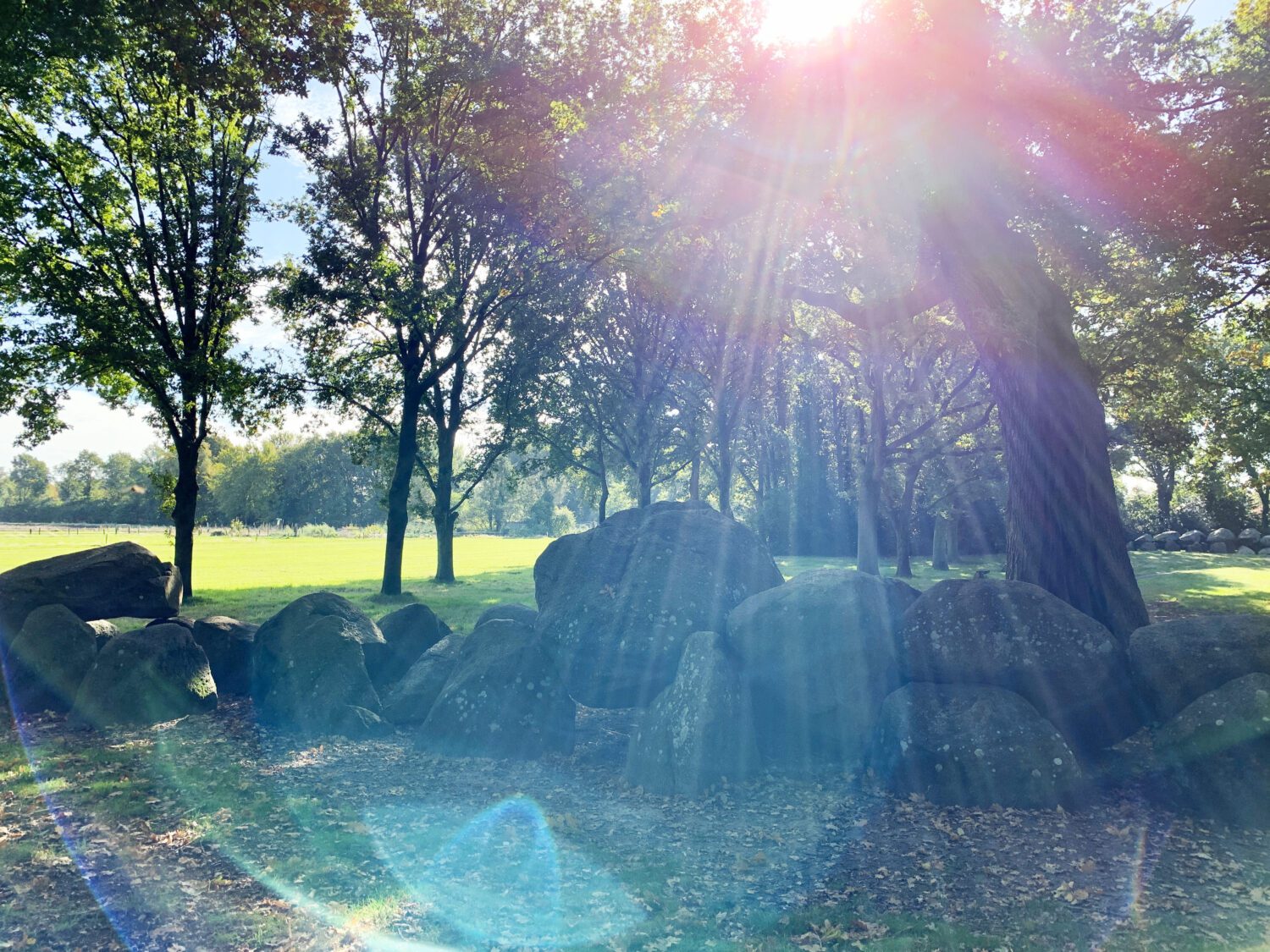 Two weeks ago my dear friend Jesse invited me over to stay with him and his family for a few days. Besides a happy and cosy holiday, I wondered what else life had in store for me in Drenthe (north of the Netherlands). As always I ‘waited’ for a sign. That clue came in the form of a woman who curiously asked if I was going to visit the Hunebeds while on my little vacation. Instantly energy rushed through my body. Bingo! That was the sign! How is it possible that, after all those trips around the world, I had never thought of these power spots on Dutch ground? Apparently this was the right time.

Hunebed is Dutch for dolmen. The common story is that these rock formations were built by hand (

) 5000 thousand years ago and served as graves. In the course of my three-day adventure, I got a somewhat different picture…

From the moment it was clear that I was going on a Hunebed adventure, the energy kept storming through my body. So much so that in a matter of hours all kinds of things around me broke down. I grinned. When that occurs, I know that something big is coming. Old unconscious resistance is then collapsing and my energy field is preparing to welcome the new. Whatever would happen, I’d be pushed out of my comfort zone (again) and receive a big energetic upgrade. I was filled with curious anticipation about what was to come.

As soon as I stepped into my car I got sucked into a vortex: the bright blue sky painted a rainbow right in front of me (no rain), countless double and triple number plates all around. I laughed. This is how it always goes: a synchronistic chain of miraculous and magical events guiding me on my path. I’ve gotten used to not search for signs, but receiving them from people and things that out of the blue present themselves to me. Truly allowing the path to unfold with as less of my personal interference as possible. Stepping aside and allowing my soul/the Universe/Source to guide the mission. Being in the moment without knowing the end result.

During my three-day stay I visited quite a few of the many Hunebeds. My enthusiasm grew by leaps and bounds. I felt like a child in a candy store. So excited to learn and experience more! As I said, I’d never really given the Hunebeds much attention and credit, but I now do realise their importance: they are great multidimensional portals, gateways into the depths of our primal power. On the first day the bright and shiny sun dropped its vibrant rays of iridescent light on the multitude of stones. As I stood amidst the stones, I was charged with a wave of sensations that moved through my entire body. Such a joy to be here! The Hunebeds gave me a similar blissful high-on-my-own-supply feeling as I had when visiting Mount Shasta, Es Vedra and the Grand Canyon. On the second day, I took shelter underneath an immense Hunebed stone while the rain was pouring down. Other visitors didn’t even notice me. I wondered if I had turned into a stone myself, invisible and totally merged with the energy field of the place

As always with these kind of trips, I had my microphone ready to record all the cosmic sounds that came through as I tuned in to the energy of these sacred places. This is how the Hunebed Series was born. The sounds help to connect with the deep essence of a powerful place and assist in restoring and recovering energetic memories and imprints from ancient times and other dimensions. In addition, the sounds help to further open and reactivate multidimensional portals. It's part of my mission.

That afternoon I went into a little ceremony with Jesse and experienced suddenly something very unexpected. A huge energy field entered my body. It was the energy of a wise woman who had lived during the time that the sacred Hunebeds were still honoured and recognised for their power. She informed me that her role in this life time is to restore the magnificence of these precious portals and that (among others) her and I would do this together. Oopsss… The message was that I would gather groups of people around the stones and she would work through me. “Oh and these one-day Hunebed ceremonies are going to be called 'OerCirkels',” she added (‘Oer’ is Dutch for ‘primal’). Goosebumps all over the place. I had to let that sink in for a while.

On the third day, magic continued to be at play. I had almost arrived at my next Hunebed when I saw an old man with long white hair and a white beard sitting on a bench (in the physical ). He peered into the distance and made some sketches while his dog was napping next to him. I noticed the amazing resemblance to Master Merlin but without his cloak and scepter. Well well… what will this special human being add to my already exciting adventure? I giggled. As soon as I greeted him, I apparently pressed the ‘on’ button and his words poured out like a gurgling river. “They say the Hunebeds are graves, but the opposite is true! They are places were life was being celebrated. Pregnant women were brought here to safely deliver their babies! The Hunebeds are built on ley lines and water veins inside the earth. When you connect them all together you will discover that they form sacred geometric formations. It’s so much more than what they want you to believe!” he passionately exclaimed. Over the past few days that ‘tomb’ story had resonated less and less with me so I was happy that this like-minded Merlin confirmed my idea. These places feel so alive!

Totally satisfied and amazed I drove back home. Not knowing that a part of the journey had yet to be revealed. During the days that followed I took my time to integrate all the powerful impressions and Light Code activations. I slept 11 hours for nights in a row. Outside of the one-on-one sessions, the days felt mysteriously misty and unclear. It was like walking through a dark tunnel. I know this feeling. There was more that wanted to come to the surface, but my unconscious resistance was not exactly excited about it. So I let it be and surrendered to the discomfort.

And then, after five days of being in the Unknown, came the unraveling of the mystery. During a Wim Hof breathing class at the yoga school, the tunnel came to an end. I was flooded with light and insights. The Hunebeds were used for multidimensional initiations! I could clearly feel the wise woman whom I had met during the little ceremony radiating inside of me. She was me in another life! She showed me how she used to be responsible as a high priestess for initiation ceremonies at the Hunebeds. I understood that that is what I am/we are supposed to do again in this life time. It overwhelmed me quite a bit, but her affirmative smile brought a comforting  calmness. Her long sparkling silver white hair danced over her shoulders. Rows of ancestors stood behind me/us to support these future Hunebed ceremonies. This wise woman is a part of my soul, which I have now retrieved. Just like the Navajo-shaman-part-of-my-soul that could come back when I visited the Navajo Nation in 2020. The fog was gone and my energy levels were back to normal.

I can see that an old treasury box filled with an abundance of ancient treasures has come to the surface, ready to be explored. Our Dutch ancestors were so much more than a group of primitive people. Hidden wisdom and ancient mysteries are waiting to be brought back to our present day consciousness.

I can’t wait to go back soon. This adventure has only just begun…

PS: If you want to stay informed about these OerCirkels, subscribe to the OerCirkels Waiting List and you’ll be the first to know when I have dates. 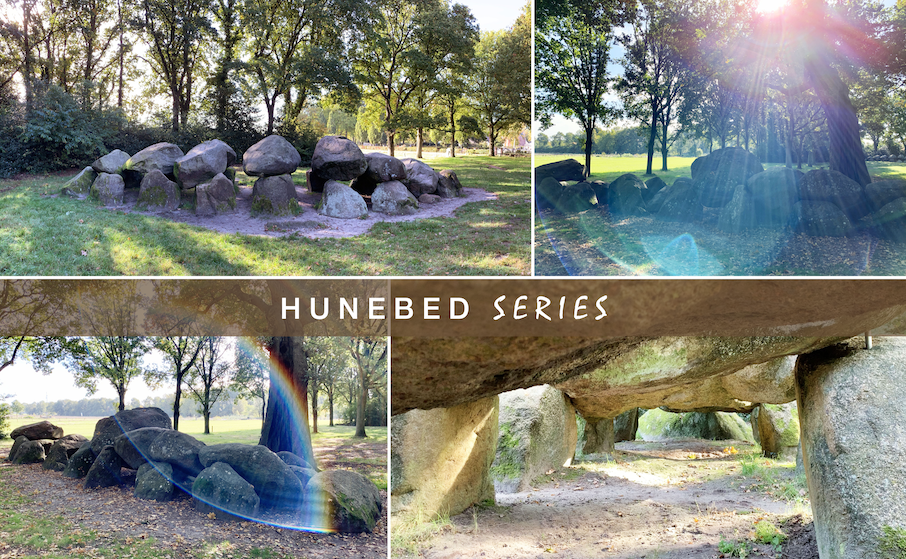 I've recorded a collection of 6 Light Code transmissions with a total duration of 2 hours and 36 minutes. They will guide you on a deep journey inward. This series offers you an opportunity for purification, remembrance and powerful re-activation. Energy will be stirred up so that a deeply rooted re-alignment can take place, that's what it did to me too. Read more here.